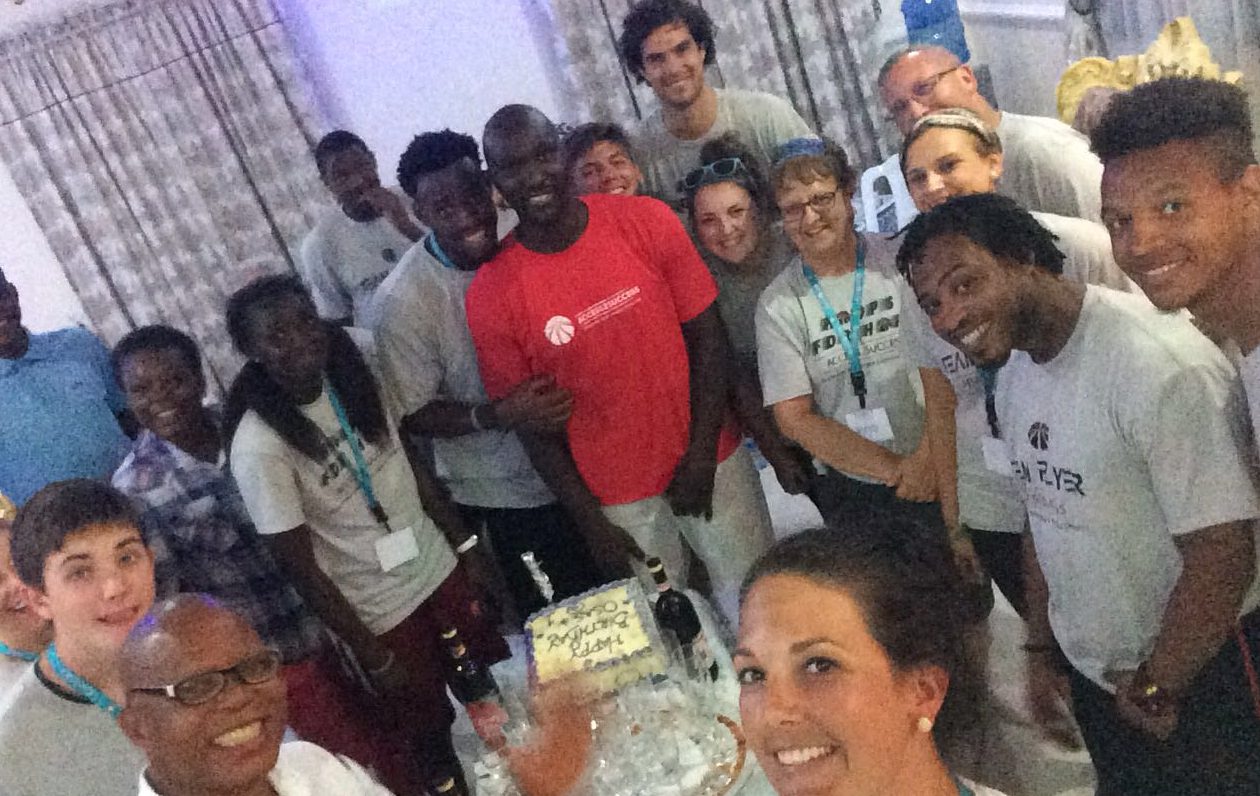 The first thing that popped into my head this morning was that we weren’t going to make it today because it was raining. We started our devotion, and before long, team two joined us. It was really nice meeting them and amazing being together. Then when we got out of our devotion, the weather was nice so we made our way to Uniben.

The kids were there, and the coaches were ready to go. The rain started to fall a little again so we moved kids into the indoor courts, and Coach Nick led them in a warmup that was a huge hit as it has been all of camp. We divided into basketball and empowerment camps, and the women went first to empowerment camp. In today’s session we asked the kids to look at the needs in their community and pick one they thought was the most needed. Then we started getting them to think about how to solve that issue. The question posed was, ‘What can I do to change my community?’ and it was amazing the great ideas that the kids had… things that I would love to do, too! Greg was explaining to them that they should focus first on trying to satisfy people’s needs. That instead of going for a profit, they should try and satisfy a customer first and then the profit will come. One little girl who wanted to have her own farm where she could produce food and also a means of making medication. She was really passionate about it because she thinks this is a way that she could help her community to get better. It reminded me back when I was in primary school, and I had the same thoughts of doing the same thing but up to now there’s no change. I’m sitting there looking at her and thinking in time, maybe things will get better.

After that, the food arrived and it was delicious – and spicy! After eating, we headed back to the basketball court while the boys headed back to do their empowerment camp. Dan and Nick led the warm-ups and then we moved into stations. But first, it was rained a little bit, so we had to assign some kids to clean up the court to get it ready for the activities. The girls were divided into stations, and then the games started. The learners were sort of quiet, but Nick really wanted them to get some time to play basketball. They weren’t doing it right, but they were having fun and trying to do better. There was this moment when I was frustrated with the kids because I wanted them to encourage each other. Later, I had a chance to play some little games with Dan and Cam, and the kids were looking at me, encouraging me with ‘Let’s go Juliet!’ It made me feel like I taught them something.

I went to ref the girls’ game, and I found it interesting that most of them think basketball is all about scoring but there is so much more to it. I saw myself in those girls because that’s what I used to think, too. I shared my experience that most people aren’t going to be scoring but there have to be people playing defense, rebounding and all the little things to have a successful team. I had a shootout with Cameron, and he won, but the kids had fun.

Then we moved to the indoor where Andrew gave advice to the kids and wrapped up the day. After the closing prayer, this girl walked up to me and wanted me to visit her school and give her classmates some advice and inspire them to change, but I won’t be able to make it on this trip. But it made me feel good that A2S is getting through to these kids. We went for dinner at Pastor Ben’s house, where we had a cake to celebrate Andrew’s son Osas’ first birthday, and headed back to the hotel for dinner. We are looking forward to wrapping up camp tomorrow and praying for good weather!