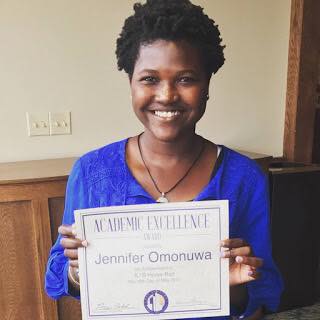 Jennifer had never left her home community before A2S gave her the opportunity to continue her studies in the United States. Her mother, a housemaid, and her father unemployed, it was not typical for someone like Jennifer to have such an adventure ahead of her. She came to A2S first as a volunteer. Our Afterschool Academy only accepted primary school children at the time. Her younger siblings were able to enroll, but Jennifer was already in secondary school. Ever determined, she discovered as a volunteer she would also be served a hot meal. She volunteered with us until we expanded to include secondary school children. Then Jennifer and all six of her siblings were able to enroll.

“The food that is served to each child at the A2S Afterschool Academy is what three people will eat in my house. By helping us with our schoolwork and giving us a hot meal each day, it reduced the amount of stress that was put on my parents. Sometimes the little things we do for people, occupy the biggest parts of our hearts. This is the case with A2S and my family.”

Jennifer arrived in the U.S.A. after school had already begun session. She was given assessments to gauge her academic abilities. Unfortunately, the school determined her Algebra scores too low. They thought it was unlikely she would graduate on time and her scholarship did not get renewed. Luckily, our A2S family was able to find her another school to attend. Despite countless obstacles– a new life to adjust to, barely missing her student visa expiration, having been told she was not good enough– Jennifer was awarded a certificate of academic excellence at the end of this school year. She finished with six As and one B (with an A in Algebra!). Next year, her goal is to be on the A Honor Roll.

Jennifer has been living with “Uncle Andrew” and Molly Lovedale. She has a banner at home that reads “The greatest pleasure in life is doing what people say you cannot do.” We are so proud of Jennifer and cannot wait to see what next achievements God has in store for her.

Despite countless obstacles — a new life to adjust to, barely missing her student visa expiration, having been told she was not good enough– Jennifer was awarded a certificate of academic excellence at the end of this school year.