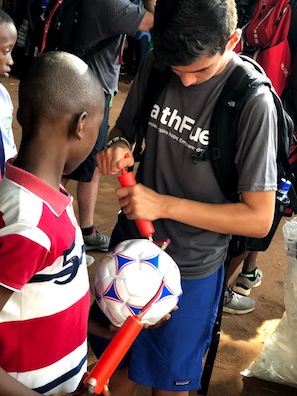 Starting the day off, Chris Dunn, an A2S Board Member, led our daily devotion. In Chris’ devotion he spoke about how the mustard seed is the smallest seed in the word but grows into a big and strong tree, forming an analogy to explain that even the smallest amount of faith has the potential to grow into the biggest and strongest tree of faith. After Chris finished his devotion, we headed into the last day of camp.

Today was the first day the campers had a sunny day so we switched the agenda around in order to give them as much time to play basketball as possible. The girls started in Empowerment Camp with the lesson of the day being how to take their personal visions and make them a reality by setting goals and managing their time better to achieve them. After they finished their last activity, we took a video of them yelling “We Deserve Some Accolades!” This is a common phrase in Nigeria and it fit perfectly with the end of camp.

Everyone at the camp joined together for lunch. During lunch I saw a group of kids sharing one serving of rice while saving another for after camp. Seeing this saddened me because they would would not have another opportunity to eat that day and they deserve more nourishment. After lunch the girls went to play basketball while the boys came to Empowerment Camp. After we completed the last day of camp I was a little disappointed that we would not be having the campers anymore.

Once we got to the basketball courts we were able to catch the playoff games and then gave out awards to the campers (I took a picture with the tallest person in the building!) After the awards there was a “dance off” between big Wisdom, Jafar and little Wisdom, which was pretty cool to watch. After this we distributed donated sneakers, gear and socks to all of the campers. It was amazing to see the campers’ faces with their new shoes, but it also made me sad to see the campers who were disappointed to not get shoes but a shirt or something else. They all had their hearts set on shoes, but were incredibly thankful for what they received. It made me realize how much we take for granted in our country.

We said our final goodbyes to the campers and headed to the van. Little Wisdom was outside the window crying and I thought my mom was going to rip the door off of the van to get to him. It was very heart wrenching to watch my mom talk to him. He was wanting to know if my mom and I were coming back next year. I think this goodbye was everyone’s lowest point of the day.

Even though we spent only 3 days with these 400 campers, we got to know them to be some of the most intelligent and wonderful people in the world. I am so glad I had the opportunity to experience this trip, meet amazing people and learn about what life is like in Nigeria.