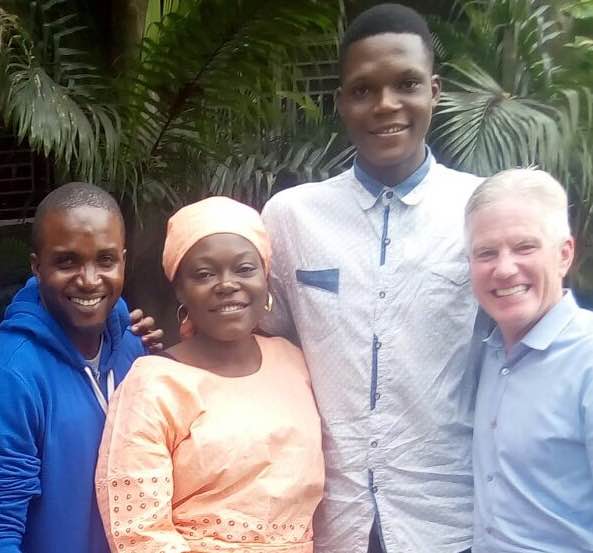 At 10-years-old, Justice Ajogbor lost both parents within a month to illness. It seemed like the world around him was collapsing. Justice was born into a polygamous home; his father’s first wife bore seven children, his mother seven. In Nigeria, it is customary that the eldest son gets most of the property. So after the death of his father and mother, the children of the first wife took everything, leaving Justice and his siblings with nothing.

Orphaned and victimized by tradition, Justice and his siblings had no one to turn to for hope but God and each other. After being introduced to the game of basketball, he found an outlet for his frustration and loneliness. Thanks to the sacrifice of a determined elder sister, he received an education. Two years later, basketball paved the way for Justice to fulfill his mother’s wish of a formal education. Through a partnership among A2S, donors and Christ School in Asheville, Justice will be continuing his education in the U.S.

Justice got his chance to attend his first free annual A2S basketball and empowerment camp in 2014. “I did not have self-confidence but during the camp was when I started to develop self-confidence,” he said. “I learned about leadership, social media and society in general. And it was really amazing that I could apply that in my daily life.”

Justice is excited about his new adventure and looks forward to learning about a new culture. He loves country music, and Jim Reeves is his favorite artist. He’s a master at making beans and porridge, and enjoys new friendships and reading. Although he was nervous before meeting his host family, Greg, Gina, Jack, and Finn Bridgeford, in Nigeria during our annual mission trip, he said, “I was surprised at how free I was around them after I got to meet and know them.”

Justice is motivated by a lot of things, for a lot of reasons… and rightfully so. Once nicknamed “Slow Motion” because of how slow he played basketball, he was determined to improve his speed. Twice denied his student visa because his status as an orphan did not show  strong  ties to Nigeria that would encourage a return, it was granted on a third try. Now he continues his quest to fulfill his mother’s wish and to reward the faithfulness of his siblings and A2S. “Education was very important to my mother,” he said. “I am driven by the desire to fulfill my mother’s wish. I am also driven by the desire to be the one who will lift my family out of our current situation.”

This gentle and humorous young man, who wears a size 18 pair of shoes, looks forward to not only realizing his dreams for himself but for his family, community and country. Like many A2S kids, he has not let his destiny be determined by background. “I hope that one day I can partner with A2S to empower youth in Nigeria,” he said with a huge smile. “I love the Lord,” he shared when asked what makes him unique. “I am not a singer but I love to sing to myself. I also love clothes with collars because I have flat shoulders for them.”

While Justice sings to himself, the room might not be able to hide him from the world any longer. And those flat shoulders can carry more than just collared shirts.