The Long Journey to Benin City 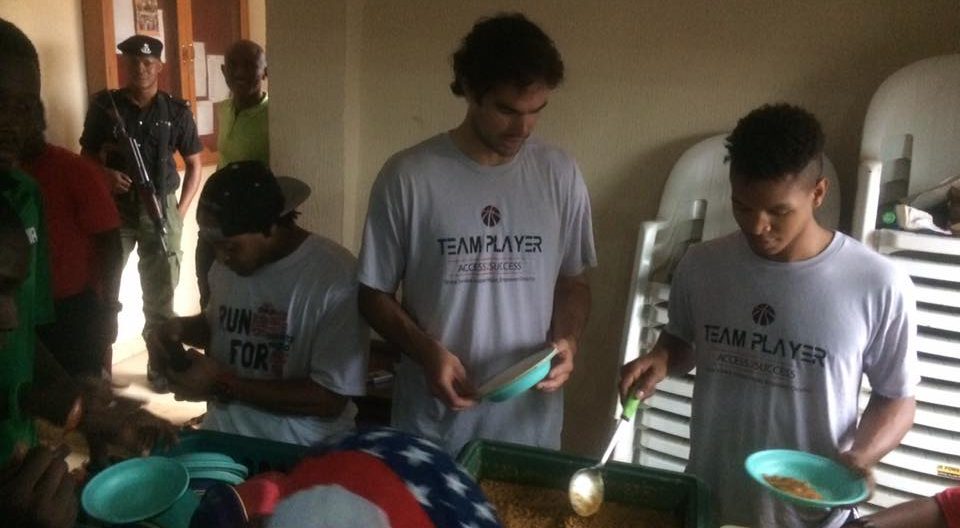 Whelp, first full day in Nigeria is in the books, and it was eventful to say the least. The flight from Atlanta was smooth and relatively quick for a transatlantic flight. What made it feel long was the 11-hour arm rest wrestling match with a lady who made it clear she had been training for this very moment and had no plans on quitting on compromising her position. I am not much of a sleeper on planes but I would like to think that I could have squeezed more than a two or three hours had I been able to comfortably rest my arm. 🙂

After arriving in Lagos, we were greeted by Andrew and Dan, two members of our team who were easy to spot from the baggage claim being that they dwarfed the rest of the Nigerians waiting for their family and friends. After a long day of flying, we all got to our hotel in Lagos, ate dinner and headed to our room to get some sleep around 11 p.m., give or take few hours because of jetlag.

Andrew gave us plenty of time to sleep in with a 4:30 a.m. wake up call for a 7 a.m. flight to Benin City. We all were half asleep heading to the airport, but still awake because riding through Nigeria with your eyes closed is nearly impossible. For one, it’s a new city so you want to force yourself to see as much of a new country and continent, as you can. And secondly driving here is more like a game of chicken. Whoever sees a lane takes the lane, and everyone who didn’t lets you know by beeping their horn five or six times either to say congratulations or as a warning to watch out for when the next small crevice opens. I think the hotel is only about 15 minutes away from the airport but 10 of those minutes are spent going in the opposite direction because that’s the closest U-turn available on the street we took.

We got to the airport to get our tickets and were ready to take off to Benin City, just to find out that our flight has been delayed till 10 a.m. That gave us another three hours to spare, so we headed back to the hotel to get breakfast and watch a Nigerian soap opera until the time came to leave for the airport again. This time we actually got on the plane, and the weather is a light drizzle but nothing too bad. By this time everyone’s body is out of whack and dead tired. Just about everyone fell asleep on the plane although it being a quick 35-minute flight to Benin.

I woke up just before we landed thinking the flight was a lot longer than I had expected because I felt like I got a decent nap in while we were in the air. Lauren then told me we were back in Lagos because the rain was too bad to land in Benin City. I blew her off thinking, she’s yanking my chain because we have been joking back and forth with each other pretty much since we met up in Atlanta. I then heard over the loud speaker, “We just landed. Welcome to Lagos. I hope you enjoy your stay.” This is the same Lagos we just took off from an hour and half before, and the flight attended said it as if we just came from another city and haven’t been here before. This level of dazed and confused is probably one I hope to never reach again. Without any other information we then got off the plane and went back to the terminal to wait for further instructions. Some time passes by, and we heard that our fight has been pushed back another three hours in order to wait for the weather to get a little better for us to land. The flight that was originally scheduled for 7 a.m. is now taking off at 3:30 pm. We played a few games to pass the time, which I won by the way, we finally board the plane and land in Benin City!

We were graciously greeted by the rest of the A2S team at the door. The greeting alone had to make a few people nearby envious. Almost as if we they were long lost family, each team member came and greeted all us by name with hugs and big smiles. It was definitely a warm welcome. We quickly dropped our bags off and headed to the church where the kids in the A2S program had long been awaiting our arrival. As soon as we got off the bus, you could hear the kids chanting or singing. We made our way up the stairs not knowing what to expect and found 200+ kids rushing us in excitement with some much genuine excitement and admiration. Words really can’t describe the welcome that we got from these kids. The only way I could try to explain it is imagine this, you’ve been living in hiding for three years straight and no one’s knows where you’ve been, you then pop up with no warning in a church in front of 200 kids and your name happens to be Stephen Curry, after back to back MVP seasons. I’m not sure how that would go but I imagine it would be something like this.

We were all drained of energy and could have been caught sleeping on the way over, but these kids energy rejuvenated all of us and put permanent smiles on our faces! After Andrew introduced us, we then got to feed these 200 kids. It was the greatest feeling in the world followed by the greatest feeling in the world. It puts it in perspective how much these kids appreciate everything we do and the opportunity we have to impact their lives this week. If I could be more excited for the week to come, the faces of those kids did it. I can’t wait for this week to begin.