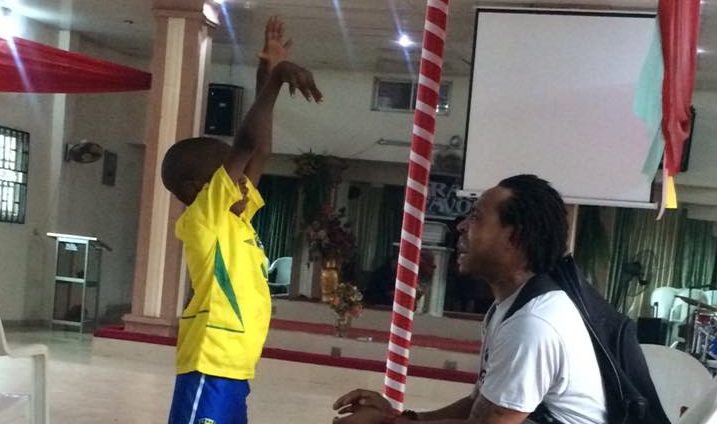 To God be the glory. Today has been one of the most inspirational best days of my life. It started off with a great devotional on heroes, reminding us that we are here to do is be heroes to these kids and especially on the first day of basketball camp.

After our great devotional by Cam, we hoped into the bus and headed to the church to collect books to give at the schools that we were going to visit. At this time, I did not know what to expect so a bit of anxiousness came over my body. I didn’t know the conditions of the schools or anything about the kids so I was very cautious. But once I got there the Lord entered my heart, and I felt like I was at home again, just going to a school to teach basketball like I do back home. The kids assembled in front of the school in about 20 lines of kids ages 4-13 in these colorful uniforms of purple, yellow, blue, red, like a rainbow of kids. Thecla started leading the kids in worship, and the chorus of kids filled up the sky with their singing like we were in an auditorium. The sounds of these kids were absolutely beautiful. To see the kids clapping, dancing, and singing, just happy to see A2S there to show love. Andrew started telling his story about how he used to sneak into this very school to study. The kids were in awe that he would sneak into a school to study… as was I. He went on to tell a story about how the security guard said he didn’t have to sneak in, and he could just ask him to let him in, which says a lot about who Andrew was then and is today: one of the smartest, caring and loving people that I have met besides the man that I know by the name of (A2S co-founder) King Mawhinney. They say birds of a feather flock together, and I know see why Andrew and King have the relationship they have.

Once Andrew finished speaking, the A2S staff went to the bus and got the books for the kids. The kids’ eyes lit up the sky just as their voices did earlier. As I started handing out the books, I felt like I was doing something that God put me here to do, to serve the people that are not as privileged as me and coming up in hard circumstances. It humbled me because my life was not perfect coming up, but it is nowhere compared to what these kids are going through. After we handed out the books, we started shaking their hands. The kids rushed just to get a touch of us. Not for money, but to show love to back to us just as we were showing love to them. I was shaking the kids’ hands and telling them to be good. Some of the kids, came back to me and told me to be good, and in that little instant, I realized that I taught them something.

We hopped into the bus and took a 45-minute ride through the countryside of Benin to a smaller school, which unfortunately was having a territory war so more than half of the kids were not in school. They lined up the same way the last school did, and Thecla led them in worship, too. I noticed the girls had the same short haircut as the boys, and I asked Ehiz why. He said it was because of maintenance, which made me sad because at an American elementary school girls are able to wear their hair in ponytails and braids. Andrew told the same story he told in the previous school, and the kids were quieter but understood. We also handed them books, and the best part of this trip was the fact that my manager from work gave me a big bag of Lifesavers. We handed out candy to these kids that had clearly have never tasted a Lifesaver. We handed out one to each, and I still had half a bag so we gave each, two, three, five… it warmed my heart because my manager gave me this candy. She didn’t have to, but did it because her heart is just as big as Andrew’s and King’s.

Once we hopped in the bus for an hour and a half for the long ride to the basketball camp. Once we got on the campus of Uniben, we got lunch before we proceeded to camp. I had my first chicken meat pie… and I had to have two. It was gooood. Once we finished eating, we hopped on the bus and headed towards the courts where kids were already playing basketball. I got out of the van and noticed that it was a different kind of heat in Africa. It was about 2 p.m. in the afternoon, and the sun felt like it was three feet away from us. I immediately started sweating and probably lost 10 pounds of water weight. I decided to get out there and have some fun myself, and I noticed that my shirt was dripping wet after I played a little one-on-one with one of the kids. I immediately started searching for some water and my breath. Once I found the two, I immediately looked for shade, of which there was very little and it was already occupied.

We hung up banners around the court and also in the gym. Eventually, all the coaches showed up, and all the kids were three. We blew the whistle and started camp. We knew there would be over 200, but we had 400 meals to give out and there were still kids who didn’t get a meal, which is a good and a bad thing. Great that A2S is growing as an organization, but sad that some of these kids traveled more than 8 hours to come to camp. Once the kids ate, we lined them up and introduced the coaches. One of the most popular, Coach Tony was celebrating his 64th birthday, and I tell you, this man looks not a day over 40.  We sang happy birthday, and then camp started. And that’s the reason why I’m here. To coach basketball, so I immediately felt like a fish in the ocean, in my element. I was ready to go to work.

As the DJ started playing music, Nathan warmed up the kids and stretched them out. This is not the typical stretching you would think for a basketball team. We danced, we jogged in place, did Zumba moves, you name it, it was going on in stretching lines. It was one of the most fun stretching sessions I have ever been a part of, with the the sun two inches closer. After stretching, we noticed that there were rain clouds on the horizon so we went inside the gym, which took a good 10 minutes because there were 460 kids by this time.

Unfortunately, there was a serious battle of badminton in the indoor court, so we went back outside, all 460 of us. Thank God above that he held the rain up for 30 more minutes so we could split up the groups into boys, girls and the learner’s division, which I was a part of.

Lauren told us that we needed to leave because the good Lord above is holding the rain off just so we can finish. And boy was she right. As soon as we got in the van, the cat and dogs started pouring from the sky. By the time, we got off campus, it was already flooding. Once we got to Pastor Ben’s house for dinner, I realized the sun beat me up like Rocky. We fellowshipped for a while and ate peanuts before dinner was served. We had minced meat, yams, eggs and greens, which by the way were some of the best greens I have ever had. I had to have two plates today. Once we were done, if I had jeans on, I would have unbuckled my belt and sat there like a fat kid. I slumped down in the chair and tried to focus on the rest of the fellowship but it was difficult because my eyes were heavy. We finished up dinner, prayed and left Pastor Ben’s house for the hotel. Overall, today was a good day.